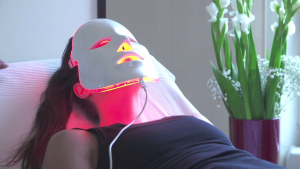 Want to regain that smooth, plump complexion of your youth?  Have a few “spots” you’d like to get rid of? Breakouts a problem? Then LED therapy might be for you.

First developed by NASA, LED works by sending energy-producing packets of light into the deeper layers of the skin. Each light color penetrates a different layer of the skin to treat different problems.

Red light LED stimulates the fibroblasts that produce collagen, which gives young skin its plump look. Professional LED machines like mine can also minimize fine lines and wrinkles, treat sun-damage, minimize the appearance of scars, and reduce redness after more aggressive IPL or laser treatments. The results won’t be as dramatic as plastic surgery, IPL or laser, but it’s a gentler, more natural, less expensive way to go.

Blue light LED works by killing propionibacterium acnes (or p-bad) that lives below the surface of the skin and is responsible for acne.

Professional LED treatments are given in salons and day spas by licensed estheticians, usually those with a serious focus on skin care. LED light therapy can be a stand-alone treatment or part of a facial. They usually cost somewhere between $75 and $125 a treatment. Cost is determined by the length of the treatment.

The recommended professional LED protocol is a total of six treatments, a week or two apart, followed by a maintenance treatment every month or two. I’ve done red light LED and it works, giving you plumper, firmer skin and a more youthful look. I have also had IPL treatments in the past and actually prefer LED.  There is no discomfort, no photo-sensitivity after the treatment, and spending a half hour relaxing during the treatment is beneficial for mind and body!

LED treatments are painless, cool and relaxing, and unlike laser treatments, carry no risk of burning.  LED treatments can take anywhere from fifteen minutes to thirty minutes. The mask containing the LED lights that I use in the salon simply rests on the face for the prescribed treatment time.

Unlike laser or IPL treatments, LED treatments don’t generate any heat. They’re even relaxing. Your eyes can’t be hurt by LED so they don’t have to be covered.  LED treatments are a good choice for people who want to boost collagen, reduce the appearance of fine lines and wrinkles or treat acne.

So how long does it take to see results? Your skin will look different after the first treatment: smoother and more hydrated with a natural radiant glow.  However, since the device is essentially stimulating the body’s natural healing mechanisms, the most visible results are not immediate.  Remember, we are treating your skin from the inside out. Instead, results occur gradually over several weeks.   With each treatment you will see improvement.  And when paired with an effective home care regimen your results will be enhanced.

While almost everyone can benefit from the use of light therapy, these treatments will have the greatest impact on skin with sluggish metabolism and slow cellular activity showing visible signs of aging.   Contraindications for light therapy include pregnancy and epilepsy, photo-allergy, and medications that cause light sensitivity (such as Tetracycline). Also, if you are currently taking steroids or cortisone injections, you should not receive light therapy.

Give me a call to book your LED treatment series.  As an introductory offer during November, you can purchase a series of 6 treatments for $250, a savings of $200.